For more than four decades, a painful disease has plagued dairy cattle – and a team of Western College of Veterinary Medicine (WCVM) researchers are rethinking the causative agent.

Since 1974 when the first case was identified in Italy, bovine digital dermatitis (BDD) or heel wart has spread to almost every dairy-producing country in the world. The disease has caused both animal welfare and economic issues for the international dairy industry.

“It is essential to determine the causative agent of digital dermatitis so that we can develop new, more effective treatment and control strategies,” says Dr. Chris Luby, an assistant professor in the WCVM’s Department of Large Animal Clinical Sciences who is part of the research team.

BDD is an infectious, proliferative lesion that develops most commonly on the skin immediately above the horn of the hoof, on the back feet of dairy cattle. It is usually located in between the bulbs of the heel or on the skin between the clefts of the hoof. It causes extreme pain resulting in lameness. As a result of the lameness, cattle don’t rebreed as easily, milk production decreases, animals are culled sooner and maintenance costs per cow increase due to treatment costs. 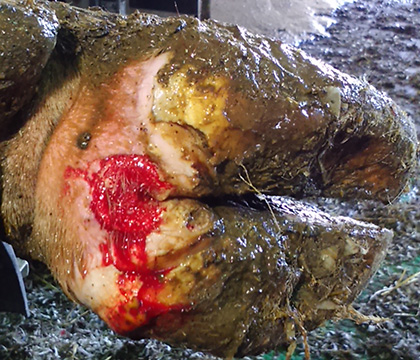 Scientists now suspect that BDD is a polybacterial disease (multiple organisms acting collectively to incite disease progression). Research has shown that bacterial DNA is predominant at all phases of the disease with almost no viral or fungal DNA present — reinforcing the theory that the disease’s main causative agent is bacteria.

Multiple species also seem to be susceptible to this condition: a similar disease has been found in beef cattle, sheep, goats and elk. In all of these species, researchers have found high numbers of Treponema bacteria in the lesions just as they are in dairy cattle.

The WCVM research team, in collaboration with Iowa State University, is looking at the biological aspects of the disease by collecting samples from the heel skin of animals with and without the disease on dairies that currently have BDD cases. Researchers are also looking at samples from a dairy herd that has never had BDD — an important part of their study.

It is difficult to find dairies in North America that do not have BDD, so being able to compare samples to a dairy that is free of BDD gives the team a unique look at the different bacteria — present or absent.

Researchers will sequence DNA in these hoof samples to determine the bacteria present in both infected and non-infected animals as well as animals with no previous exposure. By comparing the results from these different groups of animals, researchers can look for any differences in the bacterial populations.

When researchers can determine a definitive causative agent for the disease, the next step is to develop a vaccine for the disease along with preventive measures that can be implemented by dairy producers on their farms.

Larissa Goldsmith of Baldur, Man., is a second-year veterinary student who was part of the WCVM’s Undergraduate Summer Research and Leadership program in 2015. Larissa’s story is part of a series of stories written by WCVM summer research students.

Fungicides on Corn Silage, By Adam Parker from Maizex Seeds