Scope of the Problem

Lameness is generally considered to be the 3rdmost economically important health problem in dairy herds after fertility and mastitis. Worldwide incidence is reported as high as 26%  of all dairy cattle with a much higher incidence in high producing dairies in temperate countries. Canada has an incidence of 35% the US an incidence 0f 46% and a staggering 62% in the UK.

In Manitoba, lameness accounted for just under 10% of all culls however it would have contributed to low condition and fertility problems as lame cows have reduced intakes leading to poorer body condition.

There are many direct and indirect costs attributed to lameness.

The primary loss in decreased production due to reduced intake which in turn impacts on body condition.Table 1 shows the effects between heifers and older cows over the first 4 weeks of a clinical case, older cows having higher production decrease production to a greater extent.

Lame cows will show an additional weight loss of 15% in early lactation compared to non lame cows. Treatments either therapeutic such as drug and vet calls or preventative such as footbaths and hoof-trimmer visits are considerable. Ultimately the lame cows longevity is affected resulting in increased culling and replacement costs within a herd.

1 in 5 breedings will fail due to the effect of lameness (free-stall). Hoof and joint pain will prevent cattle from mounting and standing to be mounted making heat detection increasingly difficult. The reduction in condition due to a lameness incident in early lactation increases days open by 14-20 days.

For Manitoba figuring 1 in 4 cases may need antibiotic treatment the losses accrued from one case of lameness (assuming the animal recovers in 56 weeks and the incidence is 25 % for the herd) is:

Table 2. Cost of a single case of lameness

What is not included in this cost estimate is the increased likelihood of the lame cow having an identical lameness incident in the subsequent lactation.

Many lameness diseases such as laminitis are said to be multifactorial which means that are caused by a combination of risk factors. The list of risk factors is extensive and is detailed in Table 3. Most risk factors are additive leading to an increased herd incidence where 2 or more risk factors from the table below are present.

Lameness is the expression of PAIN. Cattle behave similarly to humans- the pain causes them to lie in the stall for longer and feed with more infrequently. Ultimately the well being and health status of the animal is compromised alongside production losses.

Basically lameness can be broadly categorized into 2 types: infectious and non-infectious disease

These types of disease are characterized by sudden onset and roughly account for 25% of all lameness cases. The typically bring acute pain but most are treatable with some management interventions such as maintaining a drier environment and adopting a rigorous footbathing schedule.

Heel Warts and Digital/Interdigital Dermatitis. These are highly infectious diseases which attack not the hoof horn itself but the skin surrounding and between the claws. The bacteria invade the outermost layer of skin causing painful lesions. Wet environments in the housing area favour its transfer between animals. Heef wats are commonly found just above the hairline on the rearside of the leg.

Foot Root (Foul in the Foot). This is a deep infection within the tissues encapsulated by the hoof horn by fusiformis bacteria. The foot often swells with deep cracks appearing in the tissues. In severe cases the joint capsule will become infected and infection will spread up the leg.

Laminitis. Characteristically the disease is described as primarily affecting the lamina- connective vascular tissue joining the bone and the hoof wall. Current research has showed that its root cause can affect all horn producing areas of the hoof.  Essentially it is a disruption in the blood supply to the corium which produces hoof horn. In chronic cases the hoof is hot and tender but most cases are termed sub clinical and hoof horn is poorly formed with numerous hemorrhages being incorporated in this less integral tissue.

Laminitis is probably one of the most important for the dairy industry accounting for 70-80% of all lameness cases. It is also a multifactorial disease linked to abrupt changes in diet and management around the transition period. Characteristically laminitis type lameness is seen 4-12 weeks after calving. The main theory proposed in its development is that cows switching to a highly digestible, low NDF high with exess RDP causes conditions to change in the rumen to such an extent that there is a bacterial die off. These dying bacteria release endotoxins which transfer through the bloodstream to restrict blood flow to the horn producing corium of the foot. Horn production will be severely impacted or stops entirely. The hoof is severely weakened and wears away faster or is compromised to the environment. A cascade of events is shown in below 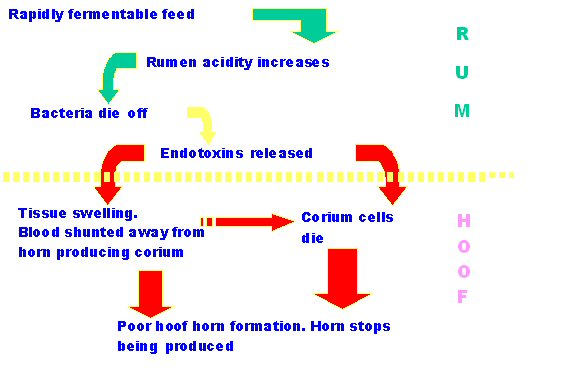 White Line Disease. Characterized by laminitis type damage in the junctional area of the sole and hoof wall. This causes the connecting hoof horn between the wall and sole to wear away faster and/or to have foreign bodies such as small stones to embed themselves in this area. If the area affected is deep enough then dirt and bacteria penetrate the hoof capsule causing a secondary infection.

Sole and Toe Ulcers. These are complete openings through the hoof horn into the underlying tissues which are often infected and always extremely painful. The same events occur in the development of sole ulcers as occur in laminitic damage. The blood supply is interrupted for a long periods to the sole corium stopping hoof horn production. The corium either dies or takes a long time to recover, during this time hoof horn is worn away exposing the underlying tissue to the environment. Often this condition is complicated by secondary infection setting in.

A stable rumen is the true key in reducing the incidence of laminitis related lameness. Adequate forage concentration in the diet should be included in a balanced ration. As a guide aim to have a minimum of 25% NDF. TMR feeding, provided it is done properly is the best option to reduce risk as rumen conditions when fed TMR are more stable. All feed changes particularly around transition should be made slowly as this is a crucial time at the very least a transition diet should be made available to dry cows 2-3 weeks before calving.

Check zinc and selenium levels with your nutritionist. Recommended zinc is 40-60 ppm in the diet with selenium depending on source being ideally 0.3 ppm and never above 1 ppm. Other additives are biotin with levels of 10-20 mg per day being proven to improve hoof health by increasing hoof horn density however the benefits  takes up to 8 months before they become evident.

Cow Comfort. Stall design to improve utilization has direct benefits for lameness. Ideally stalls should be of adequate size and not interfere with the cows motion during rising or laying down. Bedding adequately improves infectious disease levels by drying cows feet whilst in the stall. In free stall situations allow for about 3-5% more stalls than cattle to encourage longer lying behavior.

Walkways. Walkways should be grooved to improve traction and prevent cows slipping. Walkways should be cleaned regularly to prevent manure building any higher then 3 inches. Dirt walkways are primary ways of transferring infectious disease through a herd and also increase the incidence of environmental mastitis. Pay particular attention to areas where manure builds up such as behind scrapers and at cross alleys. Special attention should be paid to area where cows crowd eg entrance into the collection yard. Cows are more likely to place greater stress on hooves where they are not able to walk feely.

Have a trained foot-trimmer attend to cows hooves at least once per year but preferably twice. Have the trimmer visit 3-4 times to ensure cows are trimmed as close to dry off as possible to alleviate the impact of possible overtrimming. Provided staff have received proper training there is no reason why cows cannot be trimmed by existing herdspeople provided there is proper handling facilities. Lame cows should not be attempted by beginner foot-trimmers, these are best left to your herd health veterinarian or professional trimmer.

The proper use of footbaths can help reduce the incidence of infectious lameness disease such as foot rot and digital dermatitis or heel warts. A footbath used with a suitable chemical performs 2 functions:

Clean the footbath thoroughly before use. The cow’s feet must be clean before they enter the footbath treatment. Either set up 2 baths with the first filled with soapy water to clean the feet or wash the feet with a hose prior to going through the bath. Cows will need to stand in the bath for at least 15 seconds to receive the maximum benefit. Following footbathing put cows in a clean environment until the feet have dried. Putting cows back onto heavily slurried surfaces will counter the beneficial effects of footbathing.

Recent research from the US compared the effectiveness of antibiotic vs. non antibiotic footbath treatments. The results were interesting and are provided below:

All treatments were effective against infectious foot lesions as lesions scores decreased over time following footbath treatment. Interestingly there was no significant statistical difference between a 2 day treatment using an antibiotic and a 7 day non antibiotic footbath.

When using antibiotic footbaths it is important that the cows not drink any of the solution. This usually happens when there is no pressure behind the cow forcing her to move forward, giving her enough time to place her head down and investigate the footbath. Such behavior could result in measurable amounts of antibiotic residue showing up in the bulk tank.

In summary there are many reasons for your cows to become lame but preventative treatment by reducing the risks is the most effective. It is important to identify diseases before treatment to determine the best course of action. Lameness is an ever present problem that can only be reduced with good management, housing and nutrition.

Salmonella Dublin – What Is It?